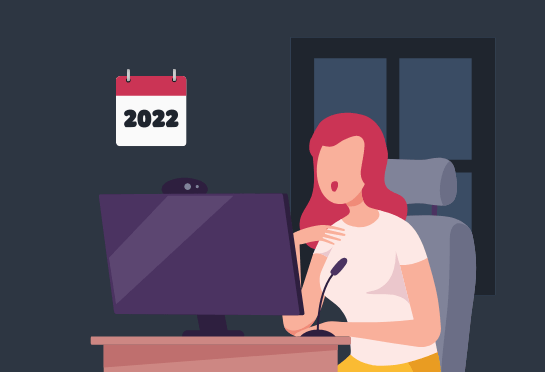 The internet world is exciting, with everything connected seamlessly to one another. Our devices, accounts, and other details are there on the internet to make our lives easier and society smarter.

Whether it's for online marketing in the form of 'personalization' or for connecting with people for 'social networking,' almost every internet user has some form of their data on the internet. And all of it brings a key concern to the table, and that's data privacy.

Data security and privacy are significant talking points in tech circles as cyber threats rise. In addition, the users are getting anxious about who keeps tabs on them and what they must do to protect themselves. So, while you can continue to use the internet to reap its benefits, it's also important to understand the key data privacy statistics to ensure that you are aware of the biggest risks and are taking every precaution to prevent them from occurring.

As digital trends keep changing rapidly, there are some important data privacy facts to look out for. In this post, we will look at some of the most critical aspects of data privacy to consider for the year 2022.

Why Do We Put Our Data Online?

Firstly, it's important to understand why we put our data online. It's important to understand this in the context of modern internet usage. Now, let's say you are setting up your phone with a new google account. It seems too tiring to enter the credentials every time we wish to log in to an account. So, we let the browser or the app 'remember' our details like passwords and usernames.

Likewise, when we shop online, it's easy to enter credit card details once and then shop using them every time. So, the major reason why we put our data online is to save a bit of time and make online processes easier for ourselves.

What Happens with Online Data?

Most websites track our online behaviors to reshape their algorithms and provide a personalized experience. For example, ever wondered why you see the same products in Facebook ads that you searched for earlier on Google? It's a major reason why nearly 79% of social media users have adjusted their social media privacy settings.

What are Data Breaches?

When you put your data online, it's vulnerable to cyber attacks from hackers and malicious actors on the internet. Our data could be anything, starting from something as simple as your name or contact number to critical details like your credit card numbers and more. Do you know that every lost record costs an average of $150?

When a breach occurs, your data is opened up to being accessed, deleted, or modified without your consent. Understandably, you will only learn about a breach well after it has occurred.

Generally, data breaches can happen due to a variety of reasons. For instance, a weak security system often leads to the leakage of passwords. Likewise, you may accidentally leak data – for example if you signed in on a university computer and forgot to log out.

Something as small as an accidental leakage can have devastating impacts on the user. A report suggests that an average data breach can cost around $3.92 million. The cost is even higher if you are a US resident.

The most concerning bit is that data breaches are far more common than you might think. They are so common, in fact, that a new hacker attacks every 39 seconds.

As far as Google is concerned, it provides third-party scripts to the websites to track the web traffic. Tracking of web traffic is one of the more concerning data privacy statistics. However, 63% of Americans mentioned that they had very little knowledge about web traffic tracking and data protection rules and regulations. So, it's easy to understand why data breaches are so common, especially in the US.

While there may be numerous reasons why websites track your data, targeted ads remain at the top. Many consumers believe that they have seen targeted ads either occasionally or frequently.

Consumer Age is a Critical Factor for Data Privacy Awareness

As regular mobile and internet users, the millennials and Gen-Z kids are more aware of how data privacy works. However, you can't say the same for older generations, particularly those above 45 years old. According to some stats, more than 60% of users curious about digital privacy facts are aged 45 or less.

It means that a considerable portion of the internet users who may have highly critical information may be risking too much just by making an online account on a random website without realizing the risk of doing so. Such cases have been reported commonly as 45% of online users claimed that their online security had been compromised on some level.

Perhaps the biggest concern for data privacy comes from social media. It's one of the major debates in recent times, as users have reported several cases of targeted ads breaching one’s privacy. However, the problem with social media is complex because it involves the consumer's consent to a certain extent.

Take Facebook, for example. Most of the ads you see on Facebook are of products or sites that you previously searched on other platforms. It keeps the users concerned because, let's be honest – Facebook has 80% of the social media world, and Google controls 90% of the search engine market. So, it's only logical that the two platforms exchange information, potentially putting user data at risk.

It's one of the things that prompted Facebook to introduce protected display pictures. Social media data breaches have more societal impact than financial ones. Cybercriminals can target individuals based on their locations, preferences, friends, and many other choices. So, there is an obvious concern among social media users about their digital existence.

The Cambridge Analytics scandal prompted nationwide concerns as 72% of users from the US shared their concerns about information misuse via their social media accounts.

What Do Consumers Want?

Understanding of the right data privacy measures also comes from what users want. Primarily, users want a secure place to share their information without worrying about theft or any other forms of breaches. In addition, as data privacy statistics have reached online customers, they are more concerned about building trust with their concerned companies.

73% of online consumers say that trust matters more to them than it did a year ago. When there are so many data breaches costing the users millions of dollars, there will be an added concern regarding trust and reliability of the data security systems.

But at the same time, trusting an online platform has become harder for the users. 54% of consumers mentioned how it is hard for them to trust an online company with their data. About 65% of customers mentioned on a Salesforce research that they stopped buying from sellers who lost their trust due to suspicious practices related to customer data.

Amazon tops the list among the most trusted international brands online. 30% of the customers trust this service. Google and Apple are the next most-trusted companies with 27% and 22% customer retention. In comparison, Twitter is the least trusted online brand, with only 8% of customers showing trust in the social media platform.

It also brings an interesting statistic under consideration related to customer loyalty. Since the consumers are so concerned about building trust, they don't want to switch their loyalty to other options once it has been built. A resounding majority of 89% of customers are loyal to the companies that have earned their trust. That way, they don't need to go elsewhere for online shopping or availing of other services.

Who's Responsible for Data Protection?

There are mixed opinions as to who holds the responsibility for protecting the data of common users. It's an ongoing debate, and it's okay if you don't know the answer yet. However, a considerable amount of responsibility lies on the governments, and most developed countries in the world have some form of regulations to address data breaches.

According to the UN, 107 countries have placed legislations to ensure data security and privacy. But if you reside in an Asian or African region, you may be more concerned because less than 40% of the countries have adopted these laws in both regions.

Data breaches are a growing concern, so knowing the latest data privacy stats is important. Whether it's your data or business information, everything is at some level of risk and requires a security mechanism to deal with the situation. Unfortunately, however, there may be a lot of time before we see anything substantial in helping fight data privacy issues. So, until that happens, what can you do to prevent any data breaches?

Secondly, always use a VPN to prevent mishaps due to online accidents. Finally, shield your IP address and use services with end-to-end encryption. This way, you can avoid hackers and cyber attackers from getting their hands on critical information.

Lastly, being concerned about data privacy is equally important. So, make sure to keep learning about the latest data privacy stats to stay safe and aware all the time. It's astonishing that some believe there is still nothing vulnerable about online data, but you must side with the smarter ones and those who care for your online data privacy.